ASSOCIATIONS KEYNOTE SPEAKER AT YOUR CONFERENCE

Duncan Stevens is an association and conference keynote speaker, and the speaker of choice for global associations who look to become more persuasive and more effective through how they act and what they say to give them the edge during these economic challenges.

Duncan has worked with some of the world’s most recognisable associations, brands, companies and leadership teams at their conferences including Coca Cola, Nike, Ernst and Young, Deloitte, Procter and Gamble and Ford, to name just a few alongside Fortune 500 companies.

For over 10 years he has been sharing his Effective Influence Model with CEOs, company executives, senior leadership teams and sales teams from Britain to the U.S.A and from Europe to Asia.

He is the founder and CEO of the Influence Association, author of the best-selling book Effective Influence, entrepreneur and mentalist. He is regarded as one of the worlds leading authorities on influence and effectiveness and has established himself as a popular conference and associations speaker.

An association is a group of non-governmental organizations that share common goals or interact on specific issues. A conference can be either formal or informal, and they are usually composed of more than one organization. Both associations and conferences make statements to governments, influencing policy change on various levels.

They play key roles in the preparation of international protocols and conventions, as well as in the development of global legal instruments. Associations may be more focused on the exchange of information or lobbying, while conferences are usually larger events that take place over a certain period of time. 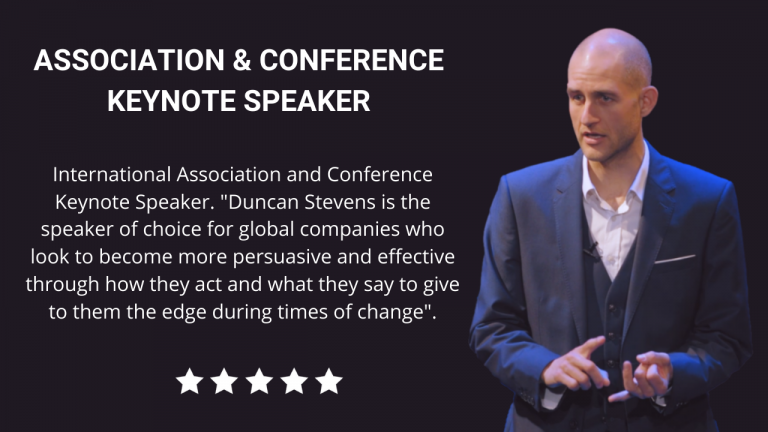 HIRE DUNCAN AS AN ASOCIATION AND CONFERENCE KEYNOTE SPEAKER HERE

GET IN TOUCH WITH DUNCAN HERE