Duncan Stevens is an Automotive keynote speaker and the speaker of choice for global automotive companies who look to become more persuasive and more effective in their industry through how they act and what they say to give them the edge during these uncertain times.

For over a decade he has been sharing his Effective Influence Model with CEOs, company executives, senior leadership teams and sales teams from Amman to Ankara and from Antwerp to Athens

He is the founder and CEO of the Influence Association, author of the best-selling book Effective Influence, entrepreneur and mentalist. He is regarded as one of the worlds leading authorities on influence and effectiveness and has established himself as a highly sought after professional motivational speaker in the automotive industry. 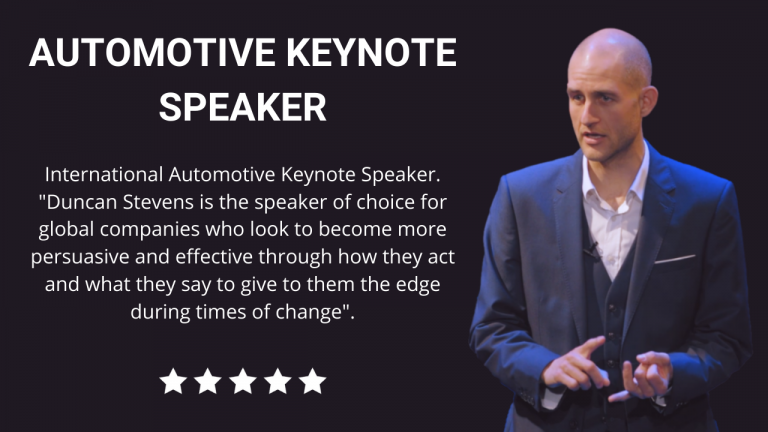 THE AUTOMOTIVE INDUSTRY AS A GROWTH MARKET:

According to a new market research report on the global automotive industry, published by MarketLine, a well-known UK-based company that provides business intelligence and other related services, the world car production was over 100 million units in 2011. This figure is increased to nearly 130 million units by 2020. Per capita car ownership has increased from 25 cars per 1,000 people in 2010 to over 30 in 2022.

The global automotive industry is highly competitive with the top ten manufacturers accounting for about 50% of total car production. The world’s largest car manufacturer, General Motors (GM), held some 12% of the market share in 2011 whilst other major players include Toyota, Volkswagen AG (VOWG_p.DE) and Ford.

Many manufacturers such as PSA Peugeot Citroën, Daimler and Fiat have been hit by the eurozone crisis. They are now looking to expand their operations outside Europe, particularly in Asia and Latin America where growth prospects had looked promising but took a big hit off the back of the global pandemic.

The emerging economies accounted for over 40% of global car production in 2021 with China being the largest producer followed by Brazil and Russia. China produced nearly 30 million cars in 2020. India’s domestic car sales jumped from 1.7 million units in 2012 to over 3.5 million in 2020, led by a surge in demand for small cars.

in 2021 electric cars accounted for over 5% of total world car production, up from around 3% in 2011. China remains the main market for electric vehicles with its demand more than doubling in 2021 due to favourable government policies and state support. Sales have also increased rapidly in other Asian and European countries such as Japan and Norway.

Perhaps one of the most popular cars on the road in recent years have been Teslas.

Tesla Motors have experienced massive growth between 2012 and 2021 with the company’s Model S will be the main driver of growth over this period.

There were 11 million hybrid cars on the world roads in 2011. This figure has since increased to over 20 million in 2021 with demand in Asia and Europe leading the way.

However, high initial costs of hybrids may prove a barrier to widespread uptake. Toyota remains the dominant player in this market accounting for nearly 30% of global production in 2021 and should continue its growth over the next 10 years.

The outlook for this sector of the economy appears bright with over 100 million cars produced in 2020 despite the global pandemic hitting the sector hard. Emerging economies have contributed nearly 50% of total car production in 2021 compared to less than 40% in 2011.

Top automotive conferences in the world to attend:

– Future of Autos Summit in Germany

As a result of this growth, Duncan is regularly hired to inspire, motivate and educate delegates. Duncan’s Effective Influence Model is particularly powerful in the sales process and converts more clients from maybes into yesses. In fact, some of Duncan’s keynote speech draw direct examples from the automotive industry and is tailored to your organization, brand, team, and leaders in your language.

Duncan is a professional automotive speaker who speaks all over the world. Some his recent destinations as an automotive speaker include Jerusalem, Warsaw, Caracas, Casablanca, Atlanta, Manila, Tel Aviv, America in San Diego, Africa in Johannesburg, across Europe in Marseille and Nottingham, Cairo, Dusseldorf, Wellington, Scottsdale, Karachi, Aukland, Paris and Munich, to name just a few.