Government keynote speaker, Duncan Stevens, is the preferred speaker for corporations across the world who want to become more persuasive and effective through what they say and how they act to gain an edge in times of economic turbulence.

Duncan has consulted with many of the world’s most famous brands, businesses and leadership teams like Coca Cola, Nike, Ernst and Young, Deloitte, Procter and Gamble and Ford to name a few. He also worked with Fortune 500 companies, Industry Organizations and leaders.

In the past 10 years, Duncan has shared his Influence Effective Model with CEOs and corporate executives as well as senior leadership teams, sales teams and groups from the UK and across America to as far as Singapore and Dubai and beyond.

He is the CEO and the founder of the Influence Association as well as the author of the most popular book, Effective Influence, and entrepreneur and a mentalist. He is recognized as one of the most renowned experts on the subject of influence and effectiveness in his field and is a sought-after, easy to work with professional in the motivational speaking business. In this content-rich keynote, Duncan shares his Effective Influence Model™ to reveal how your team and leadership team can become more persuasive and more effective every single time without compromising their values. You can learn more about Duncan here. 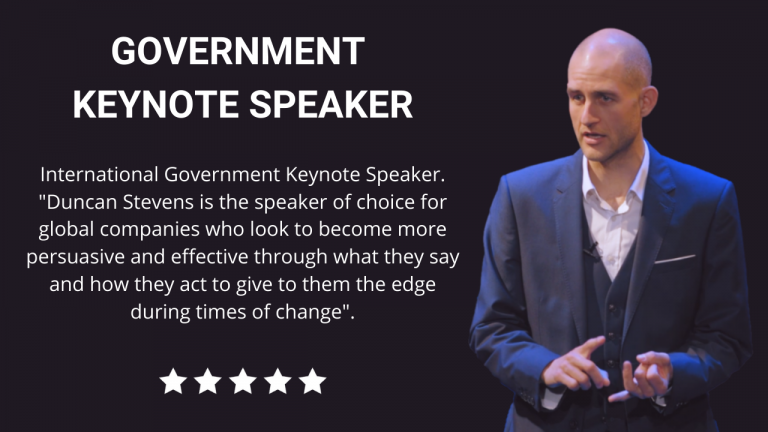 The Benefits of Hiring a Government Industry Keynote Speaker

All over the developed world, governments have been looking at ways to inject more competition into their economies. In some cases, this has resulted in public sector organisations being broken up and run as completely separate enterprises. In other cases, it has meant contracting out certain services which were previously delivered by staff directly employed by the government. And in still other cases it has been a mixture of both.

In the United Kingdom, for example, where successive governments have been working towards more competition in public services for at least twenty years, we’ve seen the creation of agency health authorities and family practitioner committees that pay GPs to provide care under contract; we’ve seen Social Services depart from local authority control and become an arm of government instead, with the result that care homes are now being run by charities and charities are being contracted to provide services to local authority clients; we’ve seen contracts awarded for everything from road maintenance to education.

As a result, bringing in a motivational speaker to a Government industry event helps sharpen their competitive spirit.

Some of the benefits include:

* Be exposed to insightful advice from an outside speaker on how goal-setting, leadership skills, etc., can be applied in the business