Pharmaceutical keynote speaker, Duncan Stevens, is a popular speaker for global pharmaceutical companies looking to become more persuasive and more effective through what they say and how they act during times of change.

For over a decade Duncan has been sharing his Effective Influence Model with CEOs, company executives, senior leadership teams and sales teams from the UK to the United States and from Zurich to Zimbabwe.

He is the founder and CEO of the Influence Association, author of the best-selling book Effective Influence, entrepreneur and mentalist. Duncan is widely regarded as one of the worlds leading authorities on influence and effectiveness and has established himself as a highly sought after professional speaker within the pharmaceutical industry. 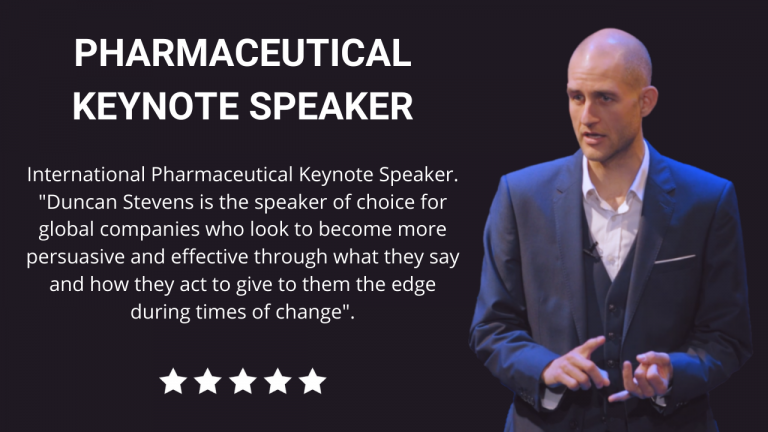 INSIGHTS FROM A PHARMACEUTICAL KEYNOTE SPEAKER:

The pharmaceutical industry is one of the largest industries on the planet. Currently, there are over 450 U.S – based companies with prescription drug sales of more than $50 million. It was an estimated $300 billion market in 2007 and has been projected to grow at 5% from 2008 to 2013. This industry has large impacts on the economy of the United States and Canada through both direct and indirect effects. The pharmaceutical industry is concentrated in only a few areas. New Jersey alone is home to almost one-third of all pharmaceutical-related jobs in the country. Though often thought of as a propitious industry, the pharma world has suffered its share of recent scrutiny. Over the last few years, there have been numerous issues with safety and effectiveness. Despite this, the industry is expected to provide employment for over 1 million people in 2013.

The pharmaceutical industry has grown exponentially over the last century to become what it is today. In 1909 only six major drug companies existed in the United States, but by 1961 there were fifty-eight. Eleven of these merged to become what is now known as Pfizer, Inc., which currently has U.S. operations in 160 countries. Pharmaceutical companies are some of the largest businesses in the world. Some of the other biggest pharmaceutical companies include Johnson & Johnson, Merck & Co., Novartis International AG, Eli Lilly, GlaxoSmithKline PLC, Abbott Laboratories, AstraZeneca plc, Sanofi-Aventis SA, and Bayer AG.

The pharmaceutical industry is extremely complex and rapidly changing reacting to global political variables, consumer demands, and technology advancements. It is composed of different stakeholders that interact with each other to create a whole greater than the sum of its parts. The pharmaceutical industry is an oligopoly since only a few companies produce most prescription medications, though it is considered mature because there are no signs of any major new entries into the market. It is also considered oligopolistic because there are many smaller companies that serve the market with niche products. This is not an altogether bad thing, as a company can survive on catering to a certain subset of consumers while paying other companies to fill in any gaps.

The great number of pharmaceutical producers throughout North America and Europe has led to a highly-competitive market, where many companies are competing for fewer consumers. This is the opposite of perfect competition because there is no differentiation in products and barriers to entry are high. However, despite this trend towards concentration, there are still a number of smaller firms that produce lower volumes but tend to have newer drugs on the market. In light of the recent pandemic, there has been even more light shining on the power of the pharmaceutical industry.

Some global pharmaceutical conferences include the International Conference on Pharmacoepidemiology and Drug Safety and the International Conference on Pharmacogenomics. Hiring a motivational or keynote speaker is a great way to liven up a pharmaceutical conference and Duncan in particular is an expert in this delivering a rich blend of entertainment, inspiration and education.