Shipping keynote speaker, Duncan Stevens, is the speaker of choice for global shipping companies who look to become more persuasive and more effective through how they act and what they say to give them the edge during times of change.

Duncan has worked with some of the world’s most recognisable shipping brands and their employees as well as a range of companies and leadership teams including Coca Cola, Nike, Ernst and Young, Deloitte, Procter and Gamble and Ford, to name just a few alongside Fortune 500 companies and NGOs around the world.

For over 10 years he has been sharing his Effective Influence Model with CEOs, company executives, senior leadership teams and sales teams from Karachi to Kiev and from Kuala Lumpur to La Paz

He is the founder and CEO of the Influence Association, author of the number one best-selling book Effective Influence, entrepreneur and mentalist. He is widely regarded as one of the worlds leading authorities on influence and effectiveness and has established himself as a highly sought after, professional speaker in the shipping industry. 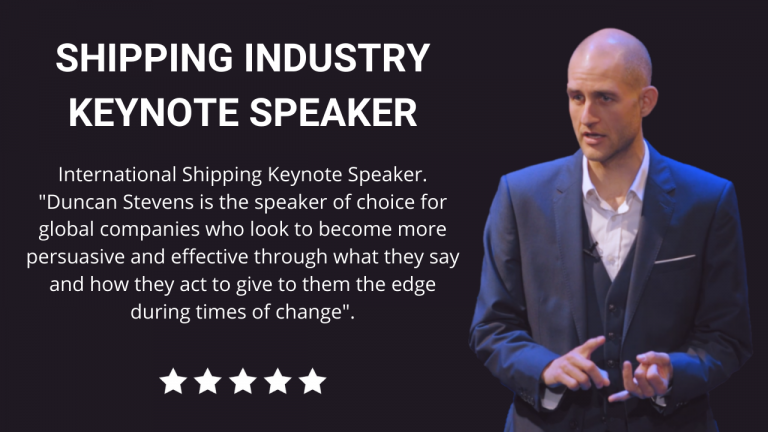 The shipping industry is the indispensable infrastructure of our global economy, moving over 90% of the world’s goods. According to Clarkson Research Services, 39 million people were employed in the maritime industries as of 2011 and generated an annual turnover of US$375 billion (not including lubricating oil and insurance). The largest merchant fleets are those of Panama (flag of convenience), Greece, and Japan.

The “United Nations Conference on Trade and Development” predicts that international seaborne trade will grow at an annual rate of 3.9% until 2030, driven by growth in trade of bulk commodities (particularly oil and LNG) as well as containerized cargo. With a 3% growth rate in the world economy, the volume of international trade is expected to grow by 4.8% per annum.

A worldwide shipping fleet of some 50,000 commercial vessels carries 90% of international trade and a large proportion of world petroleum transport. In 2005 there were 1,035 shipping firms with about 70,000 ships. The oldest known dock in the world, which belonged to King Admanatha, dates back to 700 B.C.

Shipping conferences include the Seatrade Maritime Forum, which is held in three regions around the world each year. Other shipping conferences include the World Maritime Day, held in a different location each year, and the World Ports Conference. Duncan is frequently hired as a shipping keynote speaker to inspire, motivate and educate teams and leaders within the shipping industry.